I ran into some things this week in the drawing room that I thought might be interesting to illustrate. It was by no means a great week of drawing, but it was a solid week where I learned a lot and felt like I made it past a couple walls. I still really need one of those weeks where you stand back and go “wow – I did that!” but for now “wow – I learned that!” must suffice.

My best efforts this week were with the live figure. After adjustment after drastic adjustment I really got past a struggle I was having to have the chest carry the height that the model had. As you an see, it is a proud pose, great pose.  By the time I got to blocking in the head it was flowing and I was really enjoying the work.

However, I learned some frustrating but important technical lessons. I was using a soft paper with a hard H lead. I didn’t know that was what I was doing but it became clear later. It was a new setup for me because I was feeling a little heavy handed with the HB lead. The Canson paper I used last time didn’t hold up to the erasure as much as I would have liked so I tried out some Stonehenge paper. Variables, variables.

I found that the H lead on the Stonehenge paper lightly indented the paper because I had to press a little harder to get a legible mark. Then when I went to erase and make adjustments the paper started to fuzz. The white tuff stuff erasure I was using grabbed the already fuzzed paper and marred it even more. Result…  a lesson learned and some ugly areas that will stay with the drawing forever but will greatly inform my next drawing.

The second technical lesson I learned had to do with paper again, and my inexperience with charcoal. The cast drawing is really hard for me right now. I began once but the paper was not in great shape so I got another sheet of Canson paper. I began again on this paper; it was not Canson Mi Tiennes paper I discovered.  Wow… Because I am having such a hard time locking in the shadow shapes of the cast I had to make lots of adjustments to the placement of the eyebrow. I was using a bit of a harder touch than I should with the charcoal but even still, the paper just would not let it go when I was trying to erase. By the time I got the eyebrow moved to where I wanted it there was this terrible, really bad ghost mark from where the charcoal would not erase.

Matthew and I looked at it and decided to keep working and get my placement where I wanted it. He then instructed me on how to do a very careful transfer of the drawing onto a new and better sheet of paper. A transfer is rather tricky because we are doing sight size measurement with the cast so I have to transfer the plumb line exactly, etc. Learning how to do the transfer is really interesting but this is the second time I started this freeking cast over.

Here is the deal. The solution to each of these is technical and materials related… change the lead to HB, get another sheet of paper. Simple. But I think that you can adjust tools over and over and that some combinations are just bad, but the really important adjustment is to adjust yourself… adjust the marks you make, heavier or lighter depending on the materials at hand. Personally, if I can do this I will save a lot of money because I can use the materials I have instead of chasing the perfect paper or charcoal. So yes, the problem really was a combination of materials… but the solution is found in knowing all the materials well enough to be able to anticipate and control the results.

So, there is a whole lot of technical mumbo jumbo for you, but it really was good experience for me and I know my tools that much better. The cast thing is so frustrating to me right now, but I know I will have a good run of it this time, right? They say the third time is the charm. 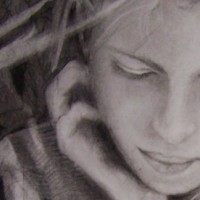 Tips, lessons, and other musings on the art life

Days and Nights of an Artist and a Poet

Path of an Artist & Writer